We live in a world in which placing the blame is often more important than fixing the problem, and based upon the events that are unfolding in Western Pennsylvania and its border state, Ohio, over the past week, the case of Butler County v. Punxsutawney Phil Sowerby may end up being a classic example of how the powers of law are often abused by small-minded officers of the court bent on personal revenge.

That is one way to look at the situation, but if claims made by the Sowersby family are found to merit closer examination, what this may actually be is another case of Corporate Greed and the abuse of the law by underhanded Corporate Stooges seeking to possess information that clearly does not belong to them, which is just the sort of activities that the Occupy Movement has been trying to warn the world about since its founding in September, 2011.

According to Butler County (Ohio) Prosecuting Attorney Michael T. Gmoser, he awoke on the morning of 22 March 2013 to a cold and blustery day and, not content to embrace the suck and live through another cold day in Ohio, resolved to make a difference and do something about it.

Reasoning that he was put in charge of the Butler County Prosecutor's Office specifically to look out for and protect not just the interests of the citizens of that county but, if we stretch the point, the rest of Ohio, and also to protect them from the knowing actions of criminal scammers and scams of all types and sizes.

That realization sparked a series of thoughts in his mind as he awoke and went through the process of completing his morning ablutions.  According to a highly placed and very reliable source who wishes to remain nameless, the decision on whether or not to indict and charge a defendant is often made either in bed, in the shower, on the toilet, or during long lunches.

Gmoser is portrayed as a family man with a hands-on approach to every aspect of life, from raising children to prosecuting the bad guys in court, and likes to use anecdotes drawn from his everyday life as he addresses the Jury in closing arguments.

The Anatomy of an Indictment

Gmoser is rumored to be in the process of creating three new motions and a discovery document to file with the court in the case of Butler County v. Sowerby, with sources claiming that he will be filing a request for funds to pay three expert witnesses to support a possible added charge of Interfering with Air Traffic Controllers, which while it is a stretch, could force the defendant to hire at least three new attorneys in order to defend the charge.

That is not an unusual tactic for Prosecutors today; adding additional charges often forces a defendant to seek a plea agreement due to the added expenses of defending themselves in multiple jurisdictions and courts.

His decision to begin the long and involved process of bringing charges against Sowerby was no different than the same decision on other cases, according to a source in his office.  "You have to have resolve and pretty good legal skills," the source advised.  "Plus being really pissed off at the defendant helps.

The charges that Gmoser intends to file include fraud and deception, and though such charges rarely include application of the death penalty, Gmoser has made it crystal clear that he intends to seek the death penalty in this case, reasoning that the circumstances of Sowerby's ongoing criminal enterprise warrants that level of punishment.

"Punxsutawney Phil did purposely, and with prior calculation and design, cause people to believe that Spring would come early," the indictment reads.

Concerned about the broad-reaching consequences the alleged fraud may have, from the financial risks that are posed to businesses and investors who rely upon the predictions made with respect to the arrival and the nature of Spring for investing, for the process of determining when to begin construction projects, and a host of other large value projects, Gmoser points out that the scammer he is going after in this indictment poses an ongoing and serious risk to society.

"He's already serving a life sentence behind bars, as you know," Gmoser told reporters from television station WXIX. Convinced that he intentionally misled the nation, Gmoser feels that the only right action is to apply the most extreme punishment allowed by law.

"I woke up this morning and the wind was blowing, the snow was flying, the temperatures were falling, and I said 'Punxsutawney, you let us down,' " the prosecutor told WXIX.

Who is this Criminal Meteorologist?
Punxsutawney Phil Sowerby, of 301 East Mahoning St., Punxsutawney PA, is by all accounts a quiet law-abiding family man and resident of Punxsutawney, a borough in Jefferson County, Pennsylvania, in the United States.

He has no criminal record, and other than his hobby as an amateur meteorologist, holds no professional licenses, bonds, or permits according to our inquiry with the Pennsylvania Secretary of State's Office.

According to a statement made by his wife, Phyllis Sowerby, who declined to be interviewed by the press, Phil is being targeted by Cincinnati-based Fortune 500 mega-corporation Procter & Gamble, who she is convinced is using Gmoser as a legal stooge in its efforts to put pressure on Sowerby to reveal the source for the “elixir of life” that is allegedly behind his unusually long life -- the amateur meteorologist is rumored to be celebrating his 125th birthday this year.

“Proctor & Gamble want the formula and they will stop at nothing to get it,” Phyllis Sowerby is rumored to have said in an interpreted statement to local police.

The police in Punxsutawney appear to be taking the claims seriously, and have relocated Sowerby and his family to a more secure safehouse located adjacent to the Punxsutawney Police Station at 301 E. Mahoning St., Punxsutawney, PA.

The safehouse is wired for both sound and video, with a number of closed-circuit security cameras that feed monitors at the Police Station that are now being manned around the clock  out of concern for Phil's safety.

‘‘Right next to where Phil stays is the police station,’’ Bill Deeley, president of the Punxsutawney club that organizes Groundhog Day event warned. ‘‘They've been notified, and they said they will keep watching their monitors.’’

Deeley was not the only member of the community that was quick to jump to Phil's defense: "If you remember two weeks ago on a Sunday, it was probably 60, 65 degrees," handler John Griffiths told WXIX in Phil's defense. "So, I mean, that basically counts as an early spring."

The question of whether there is a Corporate conspiracy involved here is not as important as the other questions and concerns held by the community, who in addition to professing love for their amateur meteorologist also feel that his occasional mistakes should be accepted as the cost of being an amateur; besides which they have a lot invested in his ongoing hobby, which is crucial to the local economy.

According to the Pennsylvania Department of Tourism, Punxsutawney Phil is the biggest tourism draw in the state, followed by the Little League World Series.  In addition to the official forecast which takes place in the morning at Gobbler's Knob, there are a large number of sanctioned and unsanctioned events, including the annual Groundhog Ball, Phil Phest, and six different musical events.

The World is taking the Indictment Seriously


Phil is reportedly unconcerned about the charges, and in a private address to the members of the community and the clubs that help host his annual events, went so far as to suggest that should the Ohio Prosecutor somehow manage to obtain an extradition order, he would rely upon Jury Nullification as his ace-in-the-hole.

While Phil appears to consider the matter something of a joke, the rest of the world is taking it very seriously indeed, and grass roots Free Phil Movements are cropping up on every continent out of a very real concern that Prosecutor Gmoser may intend to carry out the sentence himself.

To better understand the world's reaction, all that you need do is read the headlines from newspapers that are carrying the story and following Phil's plight: 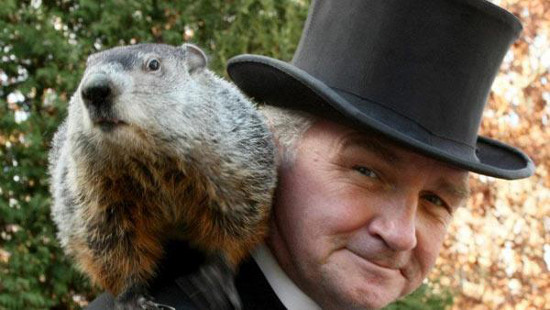 Just to be sure that we are all on the same page, this is humor in the same vein as the original indictment...
The Thoughts of Unknown on Monday, March 25, 2013