Ordinarily I do not think of myself as slow to adopt new tech but in the case of Apple's iPhone I resisted moving onto that platform for a very long time for complicated reasons.  Last year I made the move to the iPhone out of necessity rather than independent choice -- one of my jobs required it.

Around that time had you asked me if I would be getting an iPad the answer would have been a very forceful and emphatic "Hell No!" but probably not for the reasons you might think... 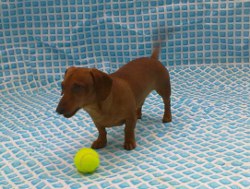 In my mind the iPad -- like the iPhone -- represented a form of tech that I felt violated some of the unwritten rules by which I operate on a day-to-day basis.  Have you ever watched the TV show NCIS?  One of the primary characters and protagonists in that television show is a character named Gibbs -- and among his many quirks and notable elements are a set of numbered rules by which he -- and by the simple extension of group-think his team -- operates.

I too have a set of rules, and like Gibbs they are, for the most part, unwritten but also inflexible.  Rule #14 is "never combine essential tech with entertainment."

If you take a closer look at Rule #14 it translates to the simple -- and I feel eminently logical -- position that placing entertainment temptations on your primary communications device is simply asking for trouble.

Just prior to making the switch to the iPhone my standard go-kit consisted of my Blackberry Smartphone, iPod (30GB Video Model), notebook computer, and various rotating kit like thumb drives, earbuds, and depending upon the story I was working on, other personal electronic devices.  When I travel I often used my iPod to listen to audio books (by way of audible.com), music (in the form of MP3's and songs from Apple's iTunes, games like Mahjong, and the occasional TV show saved to the device for later consumption when stuck on a train, plane, or automobile.  The point is that it was a designated entertainment device that had no other role among my kit.

After I made the transition to the iPhone the idea of carrying both an iPhone and an iPod made very little sense.  The iPhone replaced both my smartphone (Blackberry) and my iPod; this only made sense -- and immediately violates Rule #14. 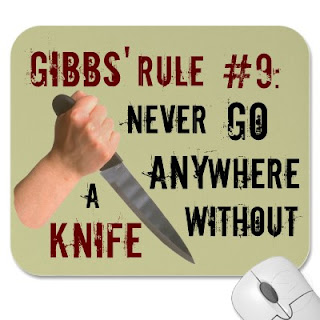 When you spend battery time listening to music or audio books, playing games, or availing yourself of any of the myriad other entertainment opportunities that can be had on the iOS platform you are in essence using up potential talk time on the cellphone side of the device.  What happens when you need to make one or more calls and you have already burned through a major percentage of the available stored charge on the device?  Simple answer: you don't make many calls.
So the choice is either carry a second iOS device that is dedicated to entertainment, or you resist the call to entertainment on your iPhone because there is no middle ground.  Adding insult to injury the iPhone is engineered with an internal battery that is not accessible to the user -- so you cannot simply carry extra power in the form of fully charged replacement batteries that effectively extend its capability.   Oh, there are external battery packs that you can carry with you and that can be used to both power and recharge the internal battery on the iPhone, but these are both inconvenient and bulky to some extent, and require you to carry additional kit in the form of their charger and cable.

In simple terms that is not a win-win situation.

The solution to this dilemma is a simple one: resist the temptation to avail yourself of the easily accessed entertainment potential in the device.  Yeah... Right.

Last year about the time that I was making the switch to the iPhone, the 'net-based audio book service Audible dot Com rolled out its own dedicated iOS App that, in addition to making it very easy -- and dare I say convenient -- to access your library of books on the service, comes with a built-in recognition program in the form of a Badge Collection that celebrates your activities in entertainment on the service.

Even having voluntarily limited myself to the use of the entertainment side of the iPhone to carefully planned and restricted circumstances, and exercising  harsh self-imposed discipline, like the bell that has been rung or the genie that has escaped the bottle, the simple knowledge of the existence of the stats portion of the Audible iPhone App was sufficient to cause me to check those stats whenever I used the device to listen to a book.

At this very moment there is a book loaded onto my iPhone -- The Diamond Age, by Neal Stephenson -- when I find myself on the T or commuter rail, on a plane, or simply stuck as a passenger in a vehicle commuting, the temptation to check my "stats" on the app is simply too powerful to resist.  "What are they, anyway?" you might ask...

There are in fact several pages on the app related to stats.  The first page, entitled "Listening Stats" depicts my iPhone Listening Level -- which at this stage could be much worse than it actually is, which is the very first level of AppNewbie (achieved on 1/12/2012 in fact). The next level up from AppNewbie is AppNovice, but to unlock that I will have to have listened to an additional 77 hours of audio books!

Above that in the mountain you climb is AppProfessional (+477 more hours), AppScholar (+977 additional hours), and finally the lofty level of AppMaster (which is the highest rating and would take an additional 1,977 hours of listening -- and my reaction is "Really?!").   My relatively low consumption rate -- a logical examination of the system suggests that at some point in the nearly 24 hours of actual listening I have unlocked the first level only -- simply because I do exercise discipline over my use of that side of the device; because after all it is a cellphone not a media player.  But still...


At the moment there are a total of 15 Badges potentially available to be unlocked in the app, and each has several levels -- bronze, silver, gold etc. -- that can be unlocked.  Each badge has a unique title and image, is rimmed with a metal band that is used to display the level of progress in the activity that is associated with the specific badge (I believe it actually goes as high as 'Diamond' level) and when you touch the badge, it offers a description to you.

So in addition to providing a difficult to resist pseudo-achievement and recognition gesture, the Badge Collection for the app is also tied into the social networking world in that with the flick of a finger you can, if you so desire, cause the App to post news of your progress and current badge level to Facebook or even Twitter.  This is truly an evil element to this app...

A brief examination of my standing in this very shrewd motivation system reveals that I have unlocked: 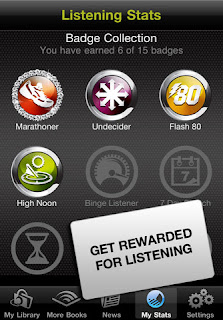 Right then, that is all of them for the moment...

On the next page of the Stats Section of the app is called "Listening Statistics" and it contains a running count of the time spend using the app to listen to the books that I have purchased over the years (I became a customer of the service in 2000) that is divided into tabs for Today, Daily, Monthly, and a running Total.

The Daily consists of a bar graph that shows how many hours were spent each day in the past week -- and if you could see my stats you could easily decipher from it that I have been using it to occupy my mind during my commutes.

The fourth and final page in the Stats Section of the app is a timeline for the "Titles in your Audible Library" that tracks what the system arbitrarily decides are epic moments for me.  Bearing in mind that, having been a customer since the year 2000 it is not really a shock to discover that I actually have 150 titles in my library -- or that some years (it divides this time span up in years you see) are more book-filled than others...

Before you start to speculate that I use this app more than I am admitting to based upon the number of books, bear in mind that the primary platform that I used in the past for this book listening was split between my notebook and iPod -- though I do not actually have the app on my iPod since I have a video iPod and not an iPod Touch -- but I am getting off track here.
In the end I can only conclude that the combination of the excellent selection of books that are available for purchase on the Audible service, combined with the very shrewdly targeted system of encouragement that the company uses to get me to listen, and well... I can only conclude that I am in fact the target audience for the service.  Sigh.
Still, if you find yourself needing to fill in an hour here or there on commutes, or the long hours of a plane ride, well you could do much worse than to find yourself lost in an audio book...  That is all I am saying...
The Thoughts of Unknown on Thursday, January 19, 2012