One of the strange aspects of playing Fallout 3 was the way it made you feel nostalgic for an era that came and went long before you were born. I do not know how the developers managed to do that, but they did it in spades.

Even allowing for the fact that as a child of the 70's (OK technically I am not really a child of the 70's because I was one of those kids who was sort of half-in the 70's half-in the 80's, but I was there man, I remember the 70's) there is a tacit connection to the era of the 1950's. What am I talking about? Well, there is an established trend in our culture with respect to fashion, TV, and to a lesser extent, cinema, that looks back 20 years. 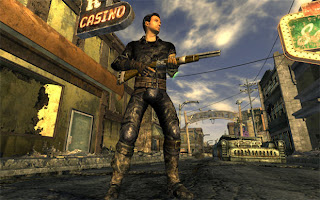 The streets of New Vegas -- go armed or go home!

In the 00's the 80's were the nostalgic era -- though having lived in that era I have to wonder about how the writers of TV shows chose to reflect upon that decade. Of course they focused upon the Breakfast Club stereotype, but the truth is that the 80's was a cold and vicious decade that is best summarized by one word: Greed. But I am getting off-track here.

In the 1970's the era of nostalgia was the 1950's, which goes a long way towards explaining why Happy Days and Lavern and Shirley were major hits on TV, why retro TV was Andy Griffin and The Honeymooners, and why a number of 50's staples in the comic book world made a reappearance. Suffice it to say that the adult TV watching generation at whom this nostalgia was targeted got to see the best parts of an era that otherwise can be defined by one word: Fear.

The developers who created Fallout 3 dialed right into that vibe and then nailed it like a Malibu surfer on a glassy 5 foot noon-thirty swell on an otherwise flat day. In the process of building the atmosphere they picked iconic music, images, and perhaps more significant, cultural fears and combined them into horror entertainment.

Fallout: New Vegas takes this perfect combination of elements and doubles its impact, its effect, and its ability to haunt you long after you turned the power on your console off and try to do other life-related things. It does not help that anytime a song from the 50's pops up on the radio or TV you are reminded of the game, practically everything reminds you of the game! Spooky.

It started slow but...

When I first slotted the game it started slow, but very quickly ramped up the tension when I found myself being executed by a gunshot to the face. Not the best way to begin your day, clearly, and yet there you have it. I would not want it any other way.

Let me be candid here -- having you "lose" your memory as a result of your injury is a slick way to handle the start of this epic adventure. Bear in mind that last game we began by being born, and then observing some of the character shaping events of your young life before jumping in at adolescence and taking over, but then in the last game we were born and raised in a Vault, and that is not the case this time around because -- this is so cool -- the area of the country we were born in was not so badly ravaged as the east coast was by the nuclear war!

Now that is not to say that the Great War did not have any impact at all -- it did, whoa baby! Having traveled through that part of the country, and even on those roads, through those towns, it is painfully clear to me just how destructive the war was on the region, and yet once you get past the rubble of the urban landscape and reach the center of what used to be the casino district -- or as the locals refer to it, the Strip -- you are left with a very vivid and clear impression that you are in Las Vegas!

That is really as far as I have gotten in the game at this point. I am getting over a very bad bit of illness -- about a week of which I was not in my right mind -- so you should probably take that into consideration as far as my warm and fuzzy feelings about the game go. Still, fever or not, I am impressed!

This promises to be a long and interesting journey.
- - - - -
Standard Disclaimer: No ghouls or mutant were harmed in the filming of this video game.
The Thoughts of Unknown on Monday, November 22, 2010