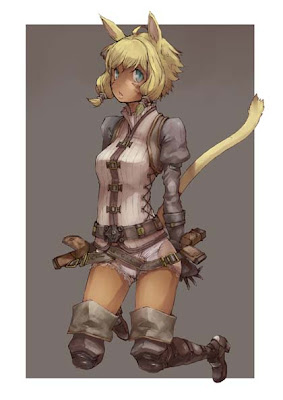 FIRST IMPRESSIONS
The months, then weeks, and finally days that had to come and go before the release of Final Fantasy XIV were often filled with stray thoughts like "wow it sure will be nice when I can actually play that game" because, and I am being honest here, I missed the original FF based MMO (Final Fantasy XI) that I used to play a lot with friends but that I honestly do not have time to play today, or tomorrow, or really whenever.

That is sort of the point, really. Total lack of time. But when something is new and shiny and has that new MMO smell you will be surprised at how much time you can MAKE to play it. Plus there is the added fact that several of my best mates live a long way away from me, and the only time that I get to spend time with them, as well as having an excuse for rambling hours-long VOIP sessions, is when we are playing MMO's.

OK, so where was I? Oh yeah, looking forward to playing FFXIV...

So the game arrives via Sir UPS, and I pop it into my PC and load it -- the PS3 version will not be arriving before March 2011 at the earliest, so it was PC or nothing -- which meant that I also had to locate my PC gamepad and plug that in. Then I had to find the drivers for it because (surprise) I have not actually used that device since before I made the switch to Windows 7.

Once FFXIV is installed and I have my gamepad plugged in with the drivers installed, I go to run the game and... It has to patch.

Three Hours Later
The patch is finally downloaded and installed -- and it only took 3 hours! How cool is that?! I remember patches for FFXI taking 8 to 12 hours, so this one was not bad at all! With the game properly patched, and even though I know that my best mate has not finished installing his copy yet, I go ahead and run the game. I create my character, I do the appearance edit and decide on the basic stats, and finally I am ready to play. I hit play.

I appear in the game, and wow, the graphics are WAY better than those from FFXI. There is an almost haunting realism to them, and as I have created a Mithra, my human-like cat chick, or maybe cat-like human chick... I am not sure... Whatever! Stands at the entrance to a long avenue in a city made of stone, and there she stands. I cannot move. The gamepad is not working.

The lights on the gamepad that are lit when it is properly loaded are lit; clearly the drivers are there, so it should work. And yet not. A quick web-search and I know why! I need to actually configure it to work for FFXIV, which means quitting the game and loading a separate config program. I do that, and five minutes later I am once again standing at the entrance to this long avenue made of stone. There are NPC characters around me, but oddly no player characters.

I push forward on the right joystick and start to walk -- Cool! The gamepad is properly configured!

A message pops up: The Server is now going down for Maintenance.

I check the message board on the official site and learn that this "Maintenance" will take 8 hours. I go to bed.

The Next Evening
The soonest that I can log in and play is late the following evening, because as much as I want to play, there are all these other things that I have to do, like work, and family, and you know, stuff. But here I am, and bonus! My best mate has installed and patched his copy, so I get to do my initial exploration of the city with him! Very awesome.

This is NOT Final Fantasy XI...

It is sort of like FFXI, but not. A lot is different. For one thing the leveling system and the jobs are much more complex and require a great deal of careful study of the conversation dialogue that I am having with NPC's. Confusion is everywhere, but slowly things begin to make sense.

OK, so there will be. There is also no follow command, and the help button leads to a notice telling me I should load a website whose URL it provides. That was not optimal. Ideally when you are looking for help in a game, the help should be IN the game.

My first impressions of FFXIV
This game was published before it was finished. So much is missing that I am actually in a slight panic as to why they released it at all... Of course that just means that it can only get better from here, right?

I really like it that you no longer have to find a moogle to change jobs -- that your job is totally dependent upon the tool/weapon you have equipped. That is very cool. But I do not understand the different jobs other than the obvious ones -- I mean a fighter is a fighter, but what I think must be White Mage actually feels like a combination of Blue and Black Mage... Obviously if you are not familiar with those classes that does not mean much to you, but there you have it.

There is a strong feeling of a tighter information density here, and a distinct and almost painful lack of community cohesiveness. In the previous MMO you had this definite sense of belonging to your home city -- which was like in this mew MMO pitted in a pseudo-war against the other cities. But the other cities are largely unknown quantities at this point... And still there is this glaring absence of any sense of identity and community.

I am hoping that this is just that fuzzy period of time in which you are just getting to know a new environment and not a true lack of cohesiveness, because that identity factor is a very special part of what made playing these games so attractive.

The other players in the game are a LOT less chatty than those in FFXI... Perhaps it is simply that everyone is new. The game has been publicly available for only a week, and I am clearly overwhelmed by the newness of it all, so I have to presume that so are the other players. Sure, some of them have been playing for almost a month if they bought the Collector's Edition (I did not), because they got early access to the game. So at least SOME of the players should be confident enough to start to be chatty... But no.

One pleasant surprise is that Mithra have tails! That may sound strange, but you see some of the early information that was released about the game two years ago and that was a subject of conversation in FFXI was that Mithra were losing their tails in the new game. I am happy that this is not true, but I cannot explain why that makes me happy.

With games like this you really cannot write a review for months because it takes months to really get a sense of the game -- so if you are expecting a review to appear in Game On you will have to be patient.

My first impressions are that I need some more first impressions. But there is a lot here to like, and assuming that they get busy adding into the game the things that should already be in it, this looks like it will be a very cool MMO home for years to come. They just better get housing in before Christmas, because I am looking forward to the traditional Christmas Quests and setting up my tree, and oh man... Must resist MMO....