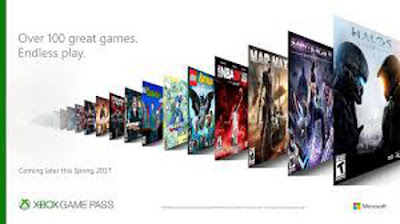 Earlier this year, Microsoft announced a new subscription-based service called Xbox Game Pass -- describing it as a new digital gaming subscription service for the Xbox One community offering  incredible value for the relatively low monthly fee of $9.99 per month.

Basically the subscription would grant access to a library of game titles - with new titles being added each month, which potentially could serve as a go-to for retro and classic gaming as well as provide the means for gamers to download and play titles from the past few years that, for whatever reason, they've missed.

Similar to the services already offered by Electronic Arts on the Xbox One -- EA Access and on Sony's PlayStation 4 streaming service PlayStation Now, both of which are video game subscription services that, in exchange for a monthly subscription fee, gamers can download and play games from the library offered by each service.

For Xbox Game Pass gamers who subscribe choose the games they want to play and digital copies are then downloaded directly to their Xbox One, with a license and, as long as they remain a Game Pass Subscriber, they can play the games from the library as much as they like.

Xbox Game Pass offers unlimited access to over 100 Xbox One and Backward Compatible Xbox 360 games for $9.99 USD per month.

In the category of AA and AAA games the library boasts all three titles in the BioShock series, both games in the Viva Piñata series, and most of the Gears of War series as well.

The service was tested extensively by the volunteer members of the Xbox Insider Program, then was fine-tuned via their feedback before being launched system-wide on 1 June across 31 markets (see below).

The LIVE service is offering gamers a 14-day free trial -- anyone with an Xbox Live account and not just Xbox LIVE Gold level members -- can start their 14-day free trial and play as many of the more than 100 games currently in the game library as much as they like. Subscriptions are be available for purchase online at xbox.com/game-pass, with a retail offering expected later this year.

Online gaming subscription services are only as good as their catalog of titles, which may be why Microsoft opted to cherry-pick from its Xbox One and Backward Compatible Xbox 360 games to offer some of the most popular games of the past few years to gamers.

The current Xbox Game Pass Library consists of :
Each month the Xbox Game Pass service will add a new set of games to the library catalog - and as an added benefit, Xbox Game Pass members can purchase all Xbox One games in the catalog - and related add-ons - at an exclusive discount if they like. It's our understanding that the LIVE Marketplace will detect your Access Membership and adjust the title prices on the Marketplace to reflect that status and discount.
In terms of its offerings, Access at the present time includes some of the most popular Xbox LIVE Arcade category games in the history of the LIVE Service - with examples including the two games in the hugely popular Keflings Series (A Kingdom for Keflings and A World for Keflings) the two most popular titles in the Toy Soldiers Series (Toy Soldiers, and Toy Soldiers: Cold War), and the cult classic Perfect Dark Zero.

In the category of AA and AAA games the library boasts all three titles in the BioShock series, both games in the Viva Piñata series, and most of the Gears of War series as well.

Gamers interested in classic arcade and retro games will be very pleased to discover that among the offerings in the library can be found CAPCOM Arcade Cabinet, and the full suite available in the Sega Vintage Collections - including Alex Kidd & Co., Golden Axe, Monster World, and Streets of Rage.

Assuming that the wizards behind the service are active in selecting prime titles for the coming monthly updates, Microsoft's Xbox Game Pass appears to be a genuine bargain in entertainment.

What's our conclusion?  After evaluating the service via the free 14-day trial our judgement is very positive - this is certainly a value for the cost, and is loaded with entertainment.  The only drawbacks that we can see are down to the actual games, which have to be downloaded to your local storage - which means you will need to have adequate space available which is typically between 3GB and 6GB per game (more for the larger titles like BioShock Infinite.


If storage is an issue for you - check out our feature piece on console storage -- Storage Problems Solved! -- (Speaking of 24 April '17) as that may be your fix straight away!