Pokemon Black/White 2 and the National Dex

The question of the day is, should I/We/You move Pokemon forward from Generation to Generation?

If you are a gamer who happens to be a Pokefan, you probably don't need me to explain this to you - but if you are not yet a Pokefan, perhaps you do?

The reason that this is a question has to do with the fact that I am usually assigned to write the Walkthrough/Guides for the Pokemon games at SuperCheats.  If you check my history/portfolio you will note that I have caught the following assignments in the realm of Pokeguides:
You will notice that there is a mixture of current and retro - that is because they were building up the Pokemon Library for Guides - but generally I have kept current with the games, which is how I found myself asking the question of whether or not I should carry the teams forward both to the next gen and next game?

On the one hand there really is no point in leaving them behind with each new generation and game when I think about it.

The mechanism built into the games started with Gen III to transfer Pokemon forward into the next Gen of the games, which meant that players no longer were forced to abandon their Pokemon when a new Gen was released - and that is a really good thing when it comes to event Legendary Pokemon.

But the real question that has been bugging me is this: should I move my teams / Pokemon forward into the new games within the current Gen?

On the one hand, that puts a lot of already leveled Pokemon into the game, which sort of detracts from the whole discovery and leveling process of the story, but on the other hand if I don't move them forward into the current title, then they basically are dormant and never used again...

Would it be better to wait until after the game is completed and the guide written so as to avoid even the whiff of compromising the game play process with respect to the guide?  Considering that my guides do not include the very long process of completing the National Pokedex, on the face of it that seems like a reasonable compromise...

But then if I were to transfer already leveled Pokemon into the games as I played them, that would pretty much eliminate a lot of the level grinding that is a requirement for these games...  I have to confess that there is significant temptation present for just that reason...


The Next Next-Gen Pokemon Games

The word is out - the Nintendo DS / DSi is a dead platform.  At least that is how we have to interpret the announcement by Nintendo that its flagship game series - Pokemon - will no longer support the DS and DSi.

This is not the first time something like this has happened, so it should not be all that great a shock really - my first exposure to Pokemon (then called Pocket Monsters) was when I was in Japan on a work contract back when the series was first released, and some of my colleagues got me hooked on the game.  I actually learned a lot of Japanese just to be able to read the screens on Pocket Monsters Green.


That was a Game Boy game - the original Game Boy I mean, black and white and really a handful compared to the current Nintendo handheld platforms.

But the massively improved graphics, deeper game play, and more involved story plus the extras more than made up for that, and the GBA had a fair run of titles in the third generation.  The fourth generation arrived on the new Nintendo DS platform, but those wizards at Game Freak figured out a way via Pal Park and the fact that the DS had a GBA cartridge slot as well as DS to allow you to move your Pokemon forward into that next gen.

And that was good.

A lot of my Pokemon - and in particular the Legendary Pokemon - made that transition!  In fact in the current generation (Gen V) I actually have Pokemon I play with that started out in Gen III!

The Next Next-Generation of the games is Pokemon X and Y, which as I noted above, Nintendo has made clear will ONLY support the Nintendo 3DS.  It was partly that announcement last fall and partly my need to be able to play through Pokemon Dream Radar in order to write up that for the current generation walkthrough and guide that caused me to have to buy a 3DS - but I was happy with my DSi Fattie really.

Sometimes we have to be forced to upgrade.

The technology with which Game Freak creates the games has come a long way it seems.  At least that is true judging by the fact that they have confirmed that for the first time in the history of the series the next generation will be released worldwide at the same time, as opposed to being released in Japan and then a year later worldwide after it gets converted to the other languages.

They have already started to let us have a peek at the new games that are coming our way this summer, starting with some of the new Pokemon and the new map (see the map embedded below)... 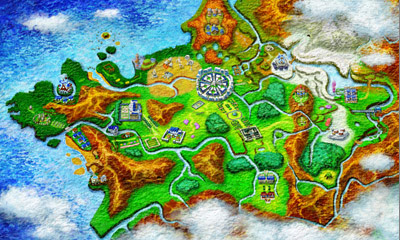 Pokemon X and Y will fully support the 3D capabilities of the Nintendo 3DS, and they will both feature new aspects to being a Pokemon Trainer, from new forms of transportation, new collections, and of course a huge selection of new Pokemon for this new region, including new legendary types.

The word is that Nintendo will be leveraging the WiFi Connection more than real-world locations for the legendary and special Pokemon give-aways, and that is cool.  But even more important is that they will be carrying forward with the online multi-player live competitions as well as online special events that they largely introduced with Black/White and Black 2 / White 2.

I have to say that is exciting - and equally exciting is the word that they will be expanding the limited multi-player events in the form of new and different mini-games, but this time around instead of making them locally-focused (as in opponents need to be in the same location) they will be more Internet focused.  Very cool.

The question of moving Pokemon from the previous generations into the new generation has not been completely addressed, but there are hints that the games will include that ability - and that is good news really if you think about it, considering that the National Pokedex will, with the addition of this new region, be rapidly approaching 1000 Pokemon!

The images of the characters that we will play in the games have received a major makeover, and it appears that their age is more mid-teens than the 9 year old that the games started out with. 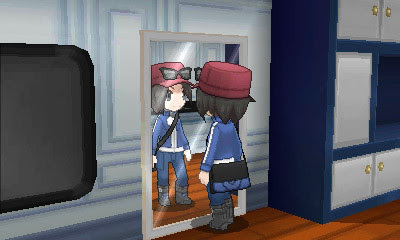 The 3D aspect and the revamped game world (and characters) will make this an interesting change, I just wonder if they will alter the camera angle like they have with other games in the 3D realm?

It is going to be an interesting summer...