The Elder Scrolls V: Skyrim is a brilliant but slightly flawed game that I personally liked a lot (and I am not just saying that because I wrote the walkthrough/guide for it).  Fans of the Elder Scrolls series will have nothing to complain about as far as game play, the world, and the story are concerned -- in fact it so improves upon the previous title in the series that it is almost like a different series entirely, though it is still that familiar world, and it nicely furthers the story.

Naturally when developer and publisher Bethesda Softworks released the first expansion to the game -- Dawnguard -- my editor assigned me to write the guide for it.  That makes complete sense considering that I (1) am already familiar with the game and (2) already have a copy of the base game.  Still I have to admit that being assigned the expansion guide was something of a pleasure.  Just don't tell my editor that, alright?

The Dawnguard expansion is not only a deep and immersive addition to the game with a story line that adds to player enjoyment and the saga, but it is also something of a departure in that the player is called upon to make choices in the game that will have far-reaching and permanent consequences both for their character and for NPC's in the game -- some of whom the player ends up killing while others end up dead as part of the unintended consequences of the story.

I have to admit that I found that part of the expansion to be particularly impactful...   Bearing in mind that when you tally up the hours I have probably already spent close to 200 hours playing in this world, and many of the NPC's in it have become well known to me...  In fact one of the merchants in the game who I saw a lot of since I used them to fence the stolen goods I obtained (they were not very concerned with where I got something, just with what price I would take for it!) ended up being killed by one of the random vampire attacks -- and while I cannot say that I felt grief or really a strong emotion over his death, I did feel something.

It is rare that a game has the sort of pull to draw in player emotion at the death of an NPC, even if the emotion was not particularly intense -- but Skyrim does that.

I find that when given the choice I would rather be a werewolf than a vampire -- and not just because the vampire is required to regularly feed on human cattle -- what they call Thrall in the game -- in order to retain their human appearance.  If the player does not feed they will eventually reach stage four of the disease, and the NPC's will instantly recognize them for what they are and attack them on sight! 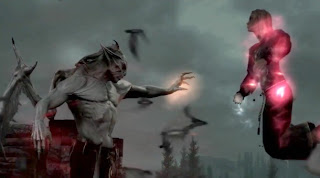 With the werewolf form you basically decide for yourself when to turn, or not, and really it does not have any great impact on play unless you choose for it to.  Meaning you can continue to play the game as if you were not infected with lycanthropy and it will have no impact.  Well, that and the fact that being a werewolf does not make you dependent upon regular feeding on human cattle.  I know it is just a game, but when you spend hundreds of hours developing a character you start to care about their lot in life, even game life.

In the end as I polish up the guide, having played through both sides of the story I must admit that in terms of dollars-per-entertainment-value we gamers have really gotten our money's worth out of this expansion.  In fact it was longer in terms of play time and quests than some full games I have played, so hey, bonus!

If you are on the fence about whether or not to purchase this expansion, I believe that I can say with some authority that you will not regret it.  Go ahead -- it is the only way you get to decide whether you suck blood or howl at the moon!