I once heard an acquaintance who is a seriously committed fan of Apple and its computer (and personal entertainment) products explaining to another acquaintance that the reason that she preferred Apple over PCs is that with the Mac you hardly ever run into problems.  And when you do the computer is smart enough to tell you what is wrong rather than force you to guess, which she believed was a universally correct fact.

When the person she was speaking with pointed out that while that may be true to some extent, the problem that they had was that when a Mac actually does have a problem, it is not usually something that the owner or user can easily fix and invariably the cost to get it fixed -- at an authorized Apple repair place -- was always three times as expensive as the cost for fixing a PC.

"You don't get it," she tried again to explain.  "The point is that PCs break like all the time!" 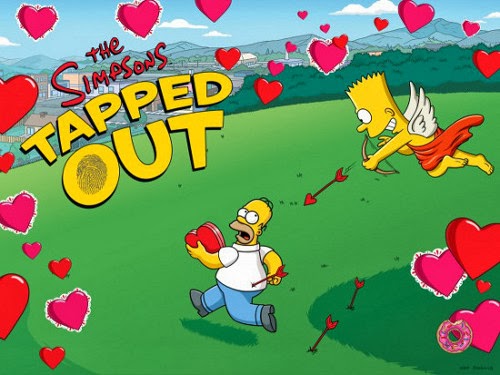 Tapped In to The Simpsons Tapped Out

I play The Simpsons: Tapped Out on my iPad.  The touch-based romp through the world of Bart and Homer Simpson and company is often the highlight of my day -- at least on the very bad days when I am forced to travel-- and I really don't have a choice about playing that particular game because I have to stay current in it as it is one of those ongoing guide projects I have to maintain.

Over the course of the past week I have not been able to play the game for more than 20 seconds without being notified that the game has disconnected from the server.

If you are not aware, Tapped Out is a touch-based fantasy game that takes place in the Simpson home town of Springfield, in which as the result of incompetence by Homer Simpson that was a product of the man and his childlike focus on video games, resulted in a meltdown at the Springfield Power Plant at which he worked that resulted in the complete destruction of Springfield and its surrounding towns (including the Krustyland Amusement Park, which is a low-scale ghetto version of Disneyland).

The basic premise for the game is that Homer, with the assistance of his family, friends, and neighbors, must rebuild Springfield one building, home, and business at a time.  Along the way in addition to rebuilding the town pretty much the way you -- the player -- think it should be built (hint: You do not have to follow the layout from the show) game play morphs into a mix of missions and quests that provoke you into building the different structures.

In addition to the reconstruction you are also presented with a serious challenge to resist the purchase of the special premium objects, structures, and people (and some cute pets) that require you to spend in-game Donut Currency, a premium form of currency most often required by exchanging real-world money for those Donuts.

That should give you a basic idea for how the game is structured, its point, and how it works.  Did I mention that Winter has arrived in New England?  Or that I am having dreams about being back home in Byron Bay where it is Summer now?  I like Summer. 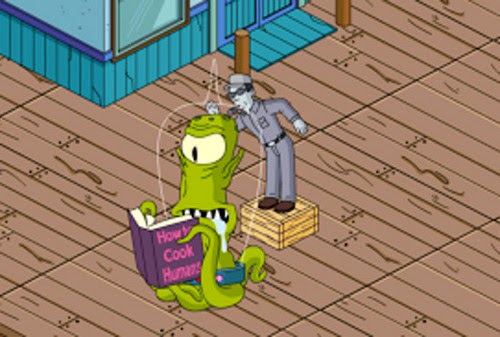 This scheme is what Microsoft imagined gamers would sit still for when they originally envisioned for the new Xbox One -- game security and authentication that was based upon an always on and always connected Internet connection.

Of course if there are any problems with that connection then you will invariably end up spending a lot of frustrated time not playing your game while you figure out what has gone wrong.  I was not able to quickly or easily figure out what was going wrong, hence my description of the problem having lasted over a week...

The basic experience worked like this: I would load the game on the iPad, tap the login button, and the game would then log in.  For 20 seconds or so (sometimes less, sometimes more)  I could play as usual, but eventually (and often sooner rather than later) I would be disconnected from the game only to then repeat the process.

Eventually all of the other things I have to do on a daily basis failed to distract me from the problem with Tapped Out so I ended up sitting down to research the issue to see if it had a solution.  The best way in my experience in dealing with this sort of thing is to look for other people online who have had the same issue and see what (if anything) they ended up doing to fix it.

Well that and also to learn the cause of the problem if that informaiton was out there...

As it turned out the problem was not the game but the network that the game uses as its connection point.  Specifically Electronic Art's Origin Network. 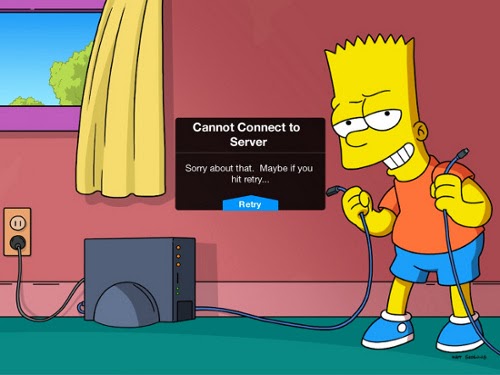 The way that this works is that logging into the game actually means logging into the Origin Network, which once you have done so, verifies that you have an account for that game, opens that game client on your local device, and then downloads your account file so that you see all the nifty things you have purchased or built in the game, and your own is the one you designed and not some other town or worse, a generic town -- but we are getting side-tracked here.

When everything is working the way it is supposed to the gaming network does some things that you don't see it doing and, more to the point, since you are not supposed to see it doing those things, does them all ninja sneaky.

Among the various tasks that the game network completes is a periodic check-in to the message system that the game uses.  Its "Post Office" if you will, that in addition to containing the email or messages that other players have sent to yhou, also keeps track of the various system messages -- including for example how many people have asked to be your friend and whether or not you have accepted those requests -- or denied them.

Since you are limited to having just 100 mates total BY that network, if you are a popular gamer you will end up spending far more time hitting the "Ignore" button on those requests than you did in accepting the earlier ones.

Here is the rub: If you have too many friend requests AND you ignored the need to press on the "Ignore" button to make the requests go away, what happens is that these requests build up into a huge pile of unresolved friend requests.

Once the pile gets sufficiently large enough to cause the game client (or the network client, which one it is is still not an established fact) to panic and crash, what happens is really simple and predictable:  You log into the game and the game goes through its normal list of start-up tasks and after about twenty seconds or so it gets to the "check for friend requests" part of the chores list and crashes your network connection.

A Simple and Easy Fix?

The solution to this issue is to go into your account and delete (press the Ignore button) for each of the thousands of outstanding and unresolved friend requests.

The problem? You have to be connected to EA's Origin server to do that.

If you are really REALLY lucky you might get the chance to hit the Ignore button on two or at the most three of those outstanding requests before the client network connection crashes.

Fortunately there is a work-around to this issue.

While dealing with the requests via the game and network client on your iPad is really not an option, if you download and install the game and network client on your notebook or desktop computer (you cannot actually play Tapped Out on either of those devices mind you so this is probably not going to be one of those intuitive processes -- once you figure out that you CAN do that, then clearing the outstanding requests is simply a ten minute period of pushing your mouse button over and over again as you click on Ignore, Ignore, Ignore...

Wouldn't it be really great if there was a button you could tap in the settings for your EA Origin account to automatically ignore or bin future friend requests?  Yeah, that would be great.

As far as I know there is no such button or setting.

How is your Monday going? 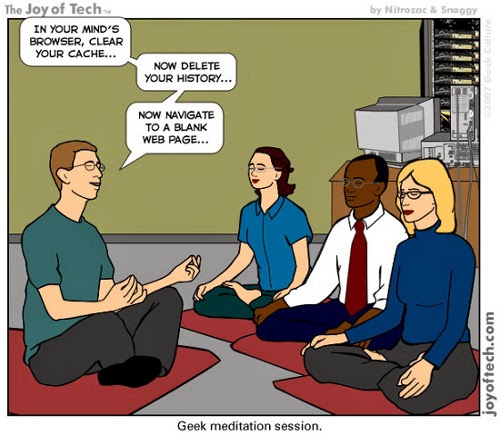 Fortune:  Stop thinking about the road not taken and pave over the one you did.

Autumn: Wouldn't it be cool if Twinkies had fortunes in them?

Yvonne: Charley would end up choking on one.

Note: Charley is our two-year-old Husky-Beagle Mix (AKA a "Busky")

The Thoughts of Unknown on Monday, December 16, 2013 No comments: